You can tell a lot about the importance of the recent America’s Cup World Series event in Naples by who was there and who wasn’t.

But from the entry list of nine teams in AC45 catamarans, we can deduce that for the Defender and Challenger of Record - respectively Oracle Team USA and Artemis Racing - the outcome in Naples was not top of their priority list for April. This did not escape the notice of Grant Dalton, the head of Emirates Team New Zealand, who some weeks before Naples had this to say: “We will be there with a full-strength crew. Is it just us or does anyone else think it is hypocrisy that neither Artemis nor Oracle is sending their A team to Naples? These are the teams that said Emirates Team New Zealand wouldn't support the ‘future’.”

Where Oracle and Artemis were each fielding two teams in last year’s regattas, in Naples there was just one apiece. For the first time at the helm of the Oracle boat was Tom Slingsby. As multiple Laser World Champion and last year’s Olympic Champion in the singlehanded hiking boat there is no question that the 28-year-old Australian is one of the most accomplished sailors of his generation. But he’s not their ‘A list’ helmsman. That continues to be James Spithill, who was not in Naples.

With all that being said, Slingsby did an amazing job of filling Spithill’s shoes, winning the match racing in Naples and just missing out on a tie-break to finish 2nd to Luna Rossa Swordfish in the fleet racing. The Kiwis put out a full-strength crew to finish in 3rd place where really this should have been an event they should have won, if for no other reason than to back up Dalton’s complaint about the absence of the big names from Oracle and Artemis.

Spithill and the bulk of the Oracle crew remain hard at work training on their AC72, as does nearly all of Artemis Racing. To pick up on Grant Dalton’s, for the ACWS to survive, and thrive, it needs to be seen as a grade one series in its own right, with the very best sailors seen to be on the start line - not too busy testing for another more important event. It would be like Red Bull pulling Sebastian Vettel out of a Formula One Grand Prix event so he could fly to the US to compete in the Indy 500 for a weekend.

If the rest of us are expected to take the ACWS seriously, so too should Oracle and Artemis. The fact that the big names remained testing in San Francisco highlights the dilemma that faces all America’s Cup holders. Oracle, and Russell Coutts specifically, have great ambitions to revolutionise the Cup. But when push comes to shove, the only thing that really matters to any Defender is winning the next Cup. And that’s why the A Team weren’t in Naples.

Alas, Naples marked the end of the America’s Cup World Series which has lit up the sailing world for the past two seasons. So why weren’t some of the big guns in Italy? The Defender and Challenger of Record had more important work to be done on San Francisco Bay. But if Oracle doesn’t show up at its own party, why should the rest of the world care?

“A joke.” That was how Dean Barker summed up his view of the AC45 racing in Venice in May. From a spectator’s point of view, I thought it was fantastic. But the light airs drifting off St Mark’s Square has reopened the debate about which should take precedence in the America’s Cup - the sport, or the show.

After some ho-hum performances in Europe, I’d begun to wonder if the sailors at Oracle were really that bothered about results on the AC45 circuit. But after a barnstorming performance in Newport, I’ve revised my view. Whichever way you look at it - financial, technological or in pure sailing terms - the Defender is going to be very hard to beat.

So all us ‘experts’ observing the America’s Cup have been saying that no one’s ever going to take it away from Oracle next September. But after the defender’s shock pitchpole and subsequent destruction of its multimillion dollar AC72, the odds on a Kiwi victory have shortened considerably.

Adversity in the America’s Cup can come from the strangest of places, as Energy Team is finding out to its cost. The French team is facing the strangest of legal battles off the water, but as to the battles on the water.... well Ben Ainslie was the biggest winner at the recent event - even if he didn’t actually win.

Any British sailing fan has known just how good Ben Ainslie is for a long time. Even so, watching him win his fourth gold at London 2012 still took my breath away. Question is, will any of that superhuman success ever give Ben a chance to take a leading man’s role in the America’s Cup?

San Diego was meant to by my warm-weather escape from the English winter, but the shorts and T-shirt never even got unpacked. Should have brought my umbrella. Still, if the weather disappointed, the America’s Cup World Series continues to deliver unpredictability and drama. Question is, how many of the nine teams in San Diego will we see next year? For some, money’s too tight to mention, but at least the return of Luna Rossa provides the prospect of another big team to challenge the might of Oracle Racing.

The first event of the America’s Cup World Series in Portugal is fast approaching. While the established Cup teams are sticking with their old keelboat personnel and re-skilling for a new format in fast cats, the start-up challengers are recruiting from the ranks of Olympic sailors. This new breed might have little to no experience of the America’s Cup, but they have grown up racing fast, high-performance boats like Tornados and 49er skiffs. The AC45 catamaran is an obvious next step for this younger generation.

I’ve got my fingers crossed that the Oatleys have more backbone than other recent challengers of record. The wine magnates from downunder are struggling to recruit the top-draw Australians for their fledgling campaign, but they do at least have the power to hold Larry Ellison’s team to the kind of cost-control measures that have long been promised, but which are yet to materialise. 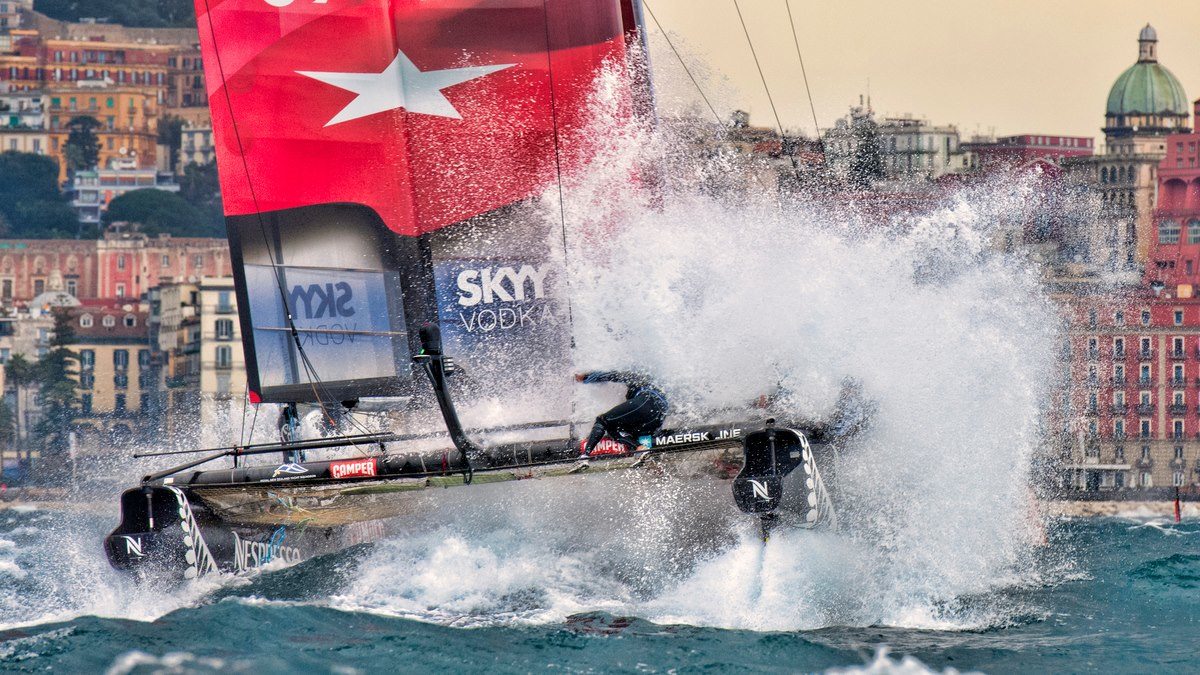 Grant Dalton getting angry. What's new there? But did he have a right to be, when asking if it was right for Oracle and Artemis to leave their A-Team sailors behind in San Francisco. More controversy for Emirates Team New Zealand in a crash with training partners Luna Rossa. Andy Rice of SailJuice.com asks Jack Griffin of CupExperience.com to share his opinions on what went down in Naples at the America's Cup World Series regatta...