Talking the same language: Peter Greenhalgh in the 49er

Justin Chisholm sat down with British 49er crew Peter Greenhalgh in the days following his win, along with helm Chris Draper, at the 2010 49er Europeans. The win had been a big confidence boost for the British pair after a disappointing sixth for them at the World Championship in the Bahamas at the beginning of the year. Justin started by asking Peter to highlight what they had learned from the World’s experience and what changes they had made in the lead up to the Europeans? Peter believes that much of the issues they faced at the Worlds were down to communication and temperament.

‘Basically at the Worlds we were in a high-pressure situation for a number of reasons. We had identified this regatta as one we wanted to peak at and get a podium result. The conditions were very tricky with forty-degree wind shifts and pressure differences across the course of up to ten knots. You could go from eighth to eighteenth very quickly. Of course that was the same for everyone but what we struggled with was dealing with the loss situations mentally. 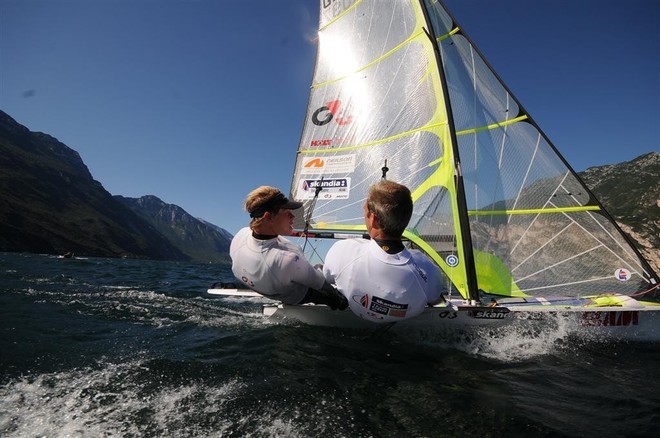 It’s hard to just shrug when you have been leading comfortably and then ten boats cross your bow, but that’s exactly what you have to do – just take it and reset then get on with the rest of the race. Chris in particular let himself get very stressed by the fact that we were losing boats, even though we knew that everyone was losing boats at some point. After the event we identified that as an area for work.’

So what specifically had they done to put this right?

‘We basically just eliminated all of the wasted negative chat and thought processes. When you race in a regatta in those conditions, which can happen anywhere, you just have to accept that you are going to have some deep results. That’s just how it is. Recognising that is pretty key and we were coping a lot better at the Europeans. Rather than having to resort to stomping his feet and then have me distracted trying to clam him down, Chris was able to just say things like “OK. Gone a bit wrong here. There’s going to be five or six boats crossing our bow.’’ That meant I was able to focus on giving the input he needs to get us back on track. We talked a lot about re-adjusting the goals. For example day one can often be the trickiest day, as you want to start the regatta strongly. Truth is though even though you might be aiming for fifteen points from three races, if you actually come out with thirty, its still not a disaster and definitely something you can recover from when you are sailing seventeen or so races in a regatta.’

So would they at the start of day one at a new venue say something like “OK this is a light and shifty day so we know what mode we have to set our minds and how to set our expectations?”

‘That’s exactly what we do. But if things change we have to be able to adapt quickly too. When it goes from blowing a gale to medium conditions, we have to be able to quickly zone in one what is now important and what is now not. Trying to get around the racecourse without capsizing is no longer a problem, but trying to keep the waves from coming over the bow because the wind has dropped suddenly really is. Power up the rig and keep the boat driving so we can look around and make good tactical decisions.’

SailJuice Xpress - 21 April 2009 - Chris Draper's Olympic Comeback...
One of the intriguing stories of the new Olympic cycle is the return of Chris Draper who, after winning an Olympic bronze and two World Championships, retired from Olympic campaigning before he'd even turned 30. Now he's back on the campaign trail, and we ask him what's going to be different this time...
Read More

Dylan Fletcher's wearing a headcam, giving a great insight into perfect 49er boathandling from the helmsman's point of view. Front of ship is Alain Sign doing all the hard work. Watch the foot work and the coordination, and the focus on a flat boat through all manoeuvres....
Read More

Onboard video of some perfect 49er boathandling
A transom-mounted camera shows Dylan Fletcher and Alain Sign producing some near-perfect boathandling in the 49er Olympic skiff. Watch the foot work and the coordination, and the focus on a flat boat through all manoeuvres....
Read More

Wire to Wire Tacking and Gybing 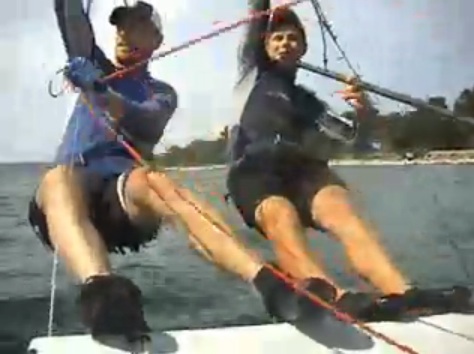 Close, but no 49er cigar yet for Dylan Fletcher and Alain Sign

Dylan Fletcher & Alain Sign have been the most consistent British 49er sailors of recent times, but they're not happy yet. All the Brit squad members are good, but not good enough... 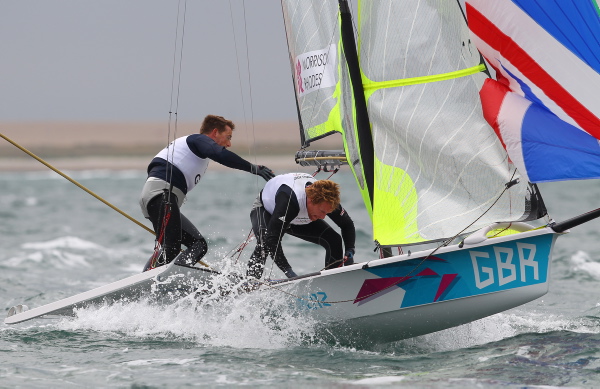 49er legend and America's Cup helmsman Chris Draper reveals what high-performance sailors can do to make your gybes not only faster but safer... 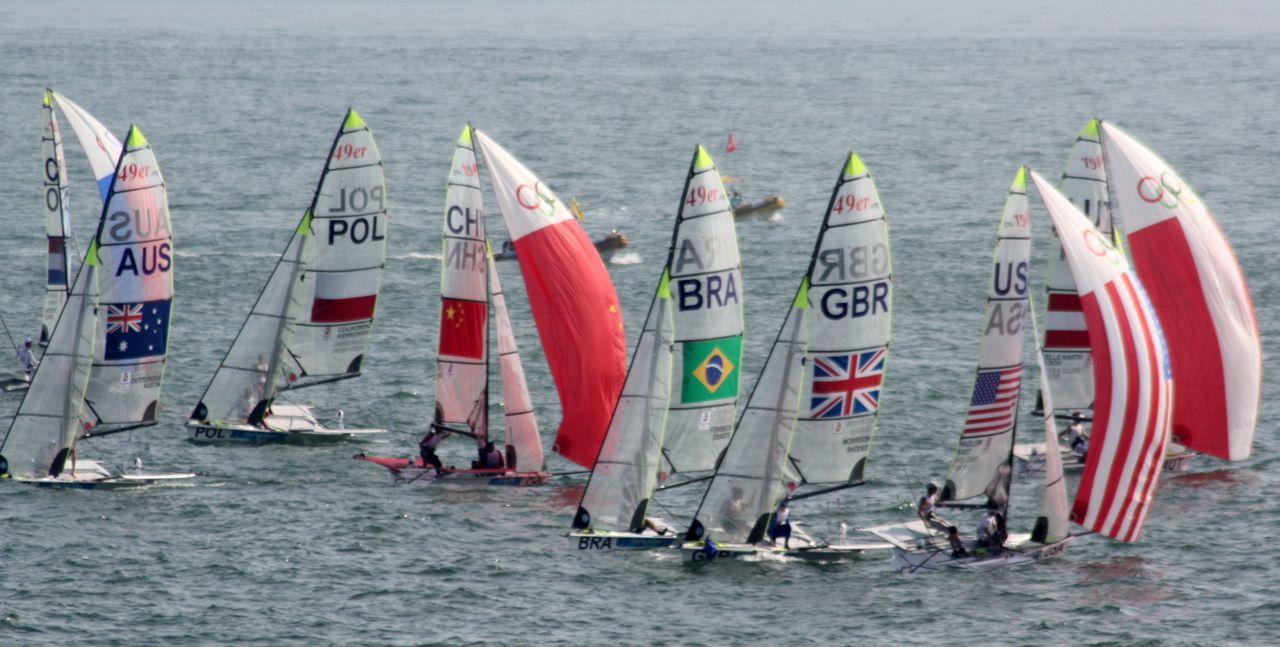 In Part 2 of Chris Draper’s tactics tips for getting out of the leeward mark zone, the 49er champion and America's Cup helmsman considers the reasons for possibly going around the ‘wrong’ mark... "If we are looking to make big gains (ie we’re further back in the fleet), then it might be worth taking the wrong leeward mark and then putting in an early tack over to the favoured side. This way, you’ll have your own lane across to the favoured side...." 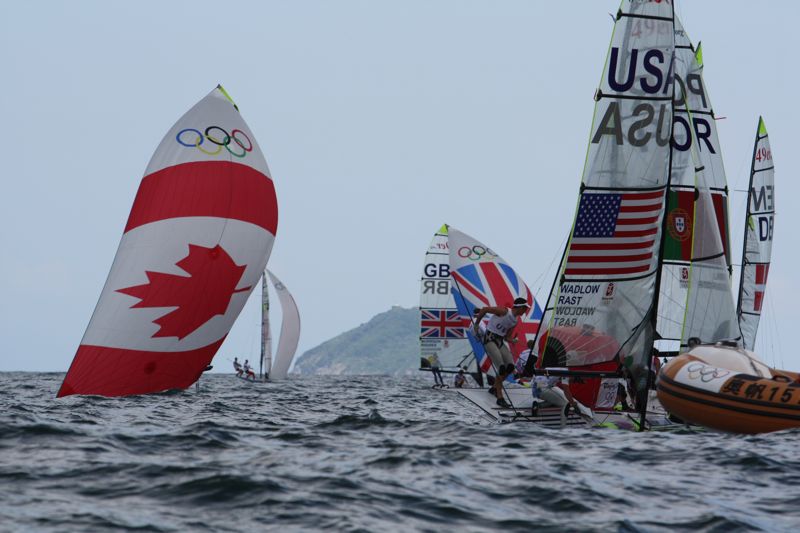 49er World Champion and America's Cup helmsman Chris Draper reveals some of his best secrets for getting in and out of the leeward mark zone as quickly as possible..."There’s a good analogy here with when you’re driving on the road and you want to overtake a car on a single-lane carriageway. You want to sit a little distance back from them, so that when your overtaking opportunity arrives you can use run-up speed to get past them, and spend the minimum time on the opposite side of the road...." 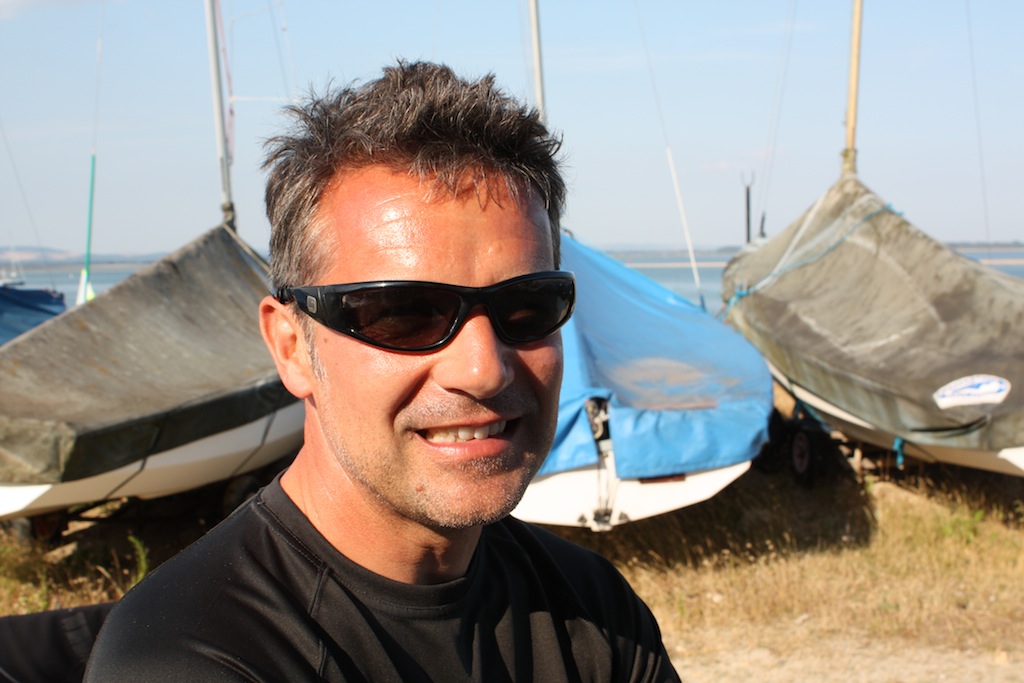 Top Moth sailor and sail designer Mike Lennon talks about the latest technical developments to roll out of the 2015 Worlds in Australia. Mike's sails were well represented at the top of the finish order, with Chris Rashley 4th and Chris Draper 5th overall...

British 49er sailors Chris Draper/Pete Greenhalgh & Stevie Morrison/Ben Rhodes are put on the spot for some quickfire answers. Amazing how much you can learn about people you thought you knew so well!