Entry now opens for the ninth edition of the GJW Direct SailJuice Winter Series, which kicks off with the Fernhurst Books Draycote Dash on the weekend of 18/19 November 2017. Many sailors like to sign up online early before events get filled to capacity, as many were last year with three events selling out. Previous winners include multiple national and world champion Nick Craig who won two seasons with various crews in his Merlin Rocket, multiple Fireball World Champion Tom Gillard, and another Fireball World Champion Matt Mee who with Emma Norris won last season’s championship in their RS200.

The official launch for the coming Series took placing during the Southampton Boat Show on the GJW Direct stand. Among the guests was Ian Walker, who has recently retired from his illustrious career as a professional sailor to become Race Director at the RYA. Ian is a past winner of a number of some events in the Series including the Bloody Mary. Last winter he turned up at Rutland Water to celebrate the memory of his late, great friend and fellow Olympic medallist, John Merricks. Not only did Ian make the after-dinner speech but he won the Tiger Trophy too, sailing an RS400 with Keith Bedborough. Ian is a big fan of the close quarters battle of handicap racing, and it wouldn’t be a surprise to see him out competing again this winter, especially now he doesn’t have a Volvo Ocean Race trophy to defend. 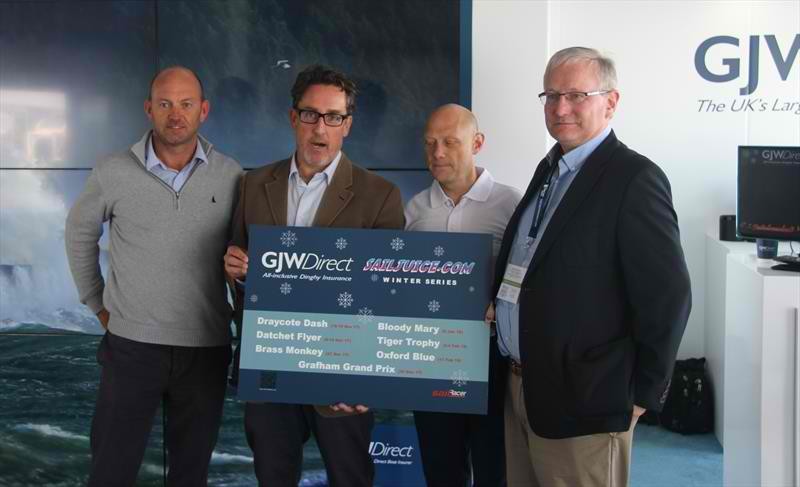 Here are some more facts on the Series:

MAKE IT YOUR CLASS WINTER SERIES

FOUR OUT OF SEVEN

The same seven events are back from last year’s Series. Once again, you must count your best four results from these seven events. Of course, you’re welcome to enter and compete in as many events as you like - all seven if you’re big enough to take on the challenge. This will give you more shots at getting a set of four good scores to put on the board.

Find out more at:  www.SailJuiceSeries.com