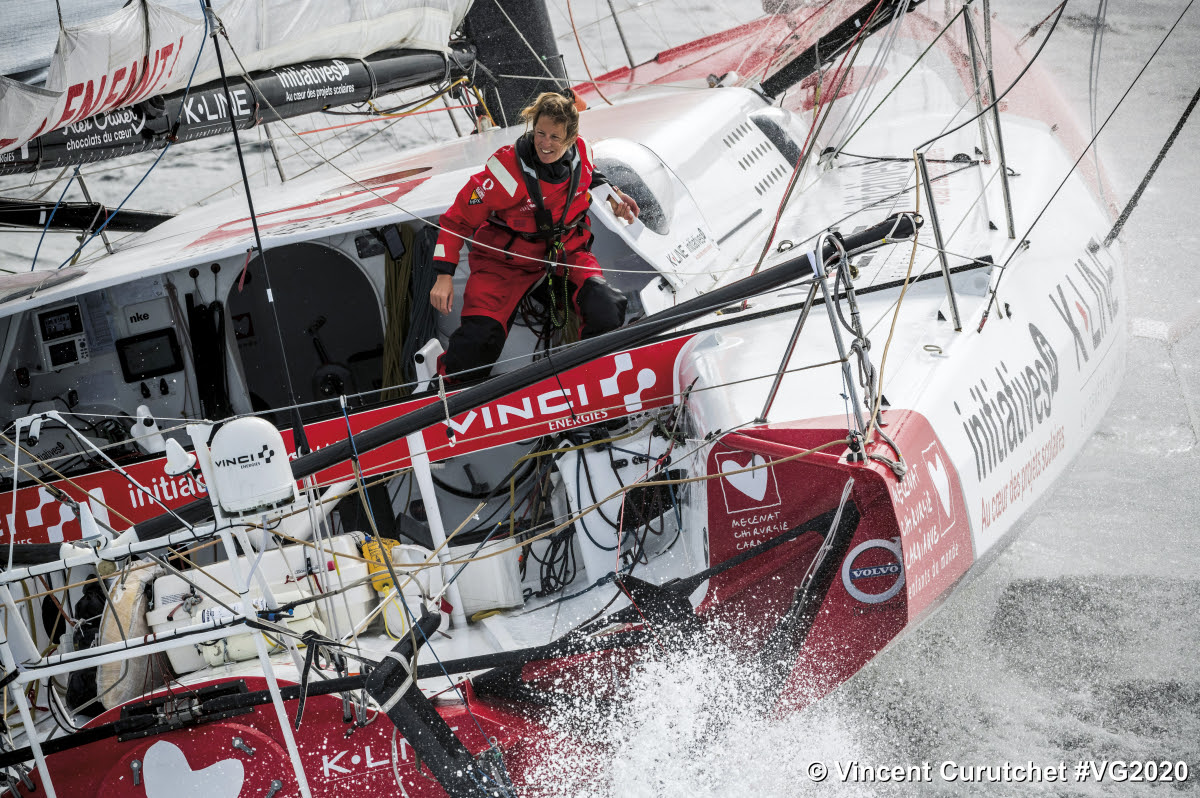 After both hitting floating objects within hours of each other yesterday at the gateway to the Indian Ocean and sustaining damage to their IMOCAs the emotion in the voices of both Sébastien Simon and Sam Davies was a stark reminder of the cruel fates which are randomly dealt to even the best prepared and smartest Vendée Globe skippers.

Both are heading north towards South Africa out of the worst of the strong winds and big seas, sailing slowly north to shelter and assess their possibilities of repair. “I want to be able to continue my Vendée Globe”, said Simon, the 30-year-old from Les Sables d’Olonne who won La Solitaire du Figaro in 2018, close to tears. He has constant water ingress from around his foil box, while Davies damaged the longitudinal framing which supports the keel of Initiatives Coeur.

She reported: “I was sailing at speeds between 15 and 22kts and I was actually just making a hot meal after the gybe and doing the stack and everything and it was just starting to get dark. I hit something. I did not see anything. I did not know what it was. It was pretty much dark when it happened. But it was as if I had run aground on a rock at the time. The boat speed went from 20kts to zero. The boat nosedived on the impact with the keel. I knew it was the keel. I heard a crack coming from there. I and everything else flew forwards, including my dinner which has repainted the entire inside of my boat. Everything moved. I went flying into a ring frame, luckily, because that could have been worse. It was really violent. But luckily, I have just hurt some ribs. It is not serious but really painful. But I stopped the boat, dropped the main, and went to check around the keel, the bearings and the bulkhead. The bulkhead, the main bearing bulkheads (which support the keel box) are intact as far as I can see. The keel bearings are intact. The longitudinal structure around the keel box is all cracked. That has taken the shock of the impact of when the boat moved, that is cracked on both sides.”

Vendée Globe Race Director a renowned former ocean racer Jacques Caraës empathised with the duo today. He explains: “Usually when you get to the gateway to the Indian Ocean, you go into another world, in another mode. You are reserved and back off. You have a more conservative attitude. Because the Deep South is a long tunnel, there is no other solution than to go to the end. And the exit is Cape Horn. There aren’t many safe havens. Psychologically, under these circumstances, it's hard."

Given the tenacity of his attack since arriving in the Roaring Forties, prepared to push his boat hard and work closer to the centre of the Southern Ocean low pressure systems, it is in retrospect maybe that Louis Burton jumping the Vendée Globe start gun back on Sunday November 8th shows a foretaste of what the 35-year-old from Saint Malo’s mindset is on this race.

Indeed, right now Burton, who is competing on his third Vendée Globe, might seem to have more in common with Alex Thomson than just Welsh roots. (Thomson was born in Cardiff, Burton’s father is Welsh and was formerly newspaper editor). Married to Servane Escoffier whose cousin is PRB’s Kevin Escoffier, Louis Burton is on his third Vendée Globe. He had to retire early in the 2012 race when he hit a fishing boat off the Portuguese coast and sustained damage to the rig of his IMOCA. He returned in 2016-17 and finished a solid sixth, sailing much of his race in relative isolation, but always sailing smart, smooth courses and looking after his boat.

And, like Thomson, Burton eschews training groups, the French ‘Pôles’, and so prefers to prepare in isolation with his tight knit group of technical experts from his base in Saint Malo.
Remarkably Parisian bred Burton, who went to the Breton Glenans sailing institution as a 15 year old already served out seven hours of penalties early in this race, five hours sin-binned for jumping the start gun and a further two for a prop sealing incident, where his team did not send the required photo as directed. He also reported a near miss with another unmarked, fishing boat which had no AIS.

Looking relaxed and wearing a big smile Burton reported from his Bureau Vallée 2 that “conditions are a bit complicated and not very stable. There are periods of calm allowing me to get more sail back up and the speed up. I have to do a lot of gybes in heavy seas. I did one during the night with 45 knots of wind, so have to be very careful. The sea is nasty but apart from the sea state it’s not too bad. It’s nice to be in this position in the Indian Ocean. The advantage is that it allows me to manage things and watch what is going on with the other boats behind me.”

Davies and Simon are the latest victims of floating objects in the water. So, what might be the reasons for these multiple collisions with objects? Alex Thomson said in his final message that he thought it was discarded or lost fishing gear that knocked out his rudder. Ice is very unlikely as there is normally no ice drifting north of the AEZ (Antarctic Exclusion Zone) and Race Direction has recently confirmed again by email the positions of ice and it is all very much in the south.

But in the area south of the Cape of Good Hope the mixing sea currents stir up billions of tons of seawater, warm coming south from the Indian Ocean sliding along the coast of Mozambique and cold waters coming up from the Antarctic meaning a proliferation of sea mammals feeding. And it is very busy area for commercial shipping traffic. The seas are often very big, confused and chaotic due to the Agulhas current which throws up occasional rogue waves that can carry many containers and other material into the sea.

Caraës explained today of the plan for Yes We Cam! to rendezvous with the French frigate Nivôse is a Floréal-class frigate which is on duty in the Southern Ocean. The plan is very much weather dependent as well as contingent on Jean Le Cam’s decision on any required detour.

"Yesterday morning right at the entrance to the Southern Ocean at 42° by 38 N and 11 09W, I go out on deck to put in a reef, scan the horizon, on the lookout and there, suddenly, downwind, at my height, I see him, noble and majestic, in his gliding flight, as if suspended, he welcomes me, opens the doors of his kingdom, I meet the eyes of my first Albatross. What a joy, I laugh alone, I am moved by this first meeting so long awaited and symbolic. I have seen my first Albatross in my life, it is no longer an image, a dream, something I have read about, no, I enjoy a few moments of watching his flight and then go back to finish manoeuvre I am in the middle of doing... the escort will only last a few moments, but this magical encounter gives true point of entry for this journey into the great south in the most beautiful way possible."

“I am trying to adapt my rhythm here. Speed is up and down with the waves; it is not easy to adapt to get a good average speed. I lost two places on the tracker but I am not too highly concerned about that because it is about staying with the pack and not losing a massive amount of miles but also just sustaining solid work here. I am trying to force myself to eat at regular times.”