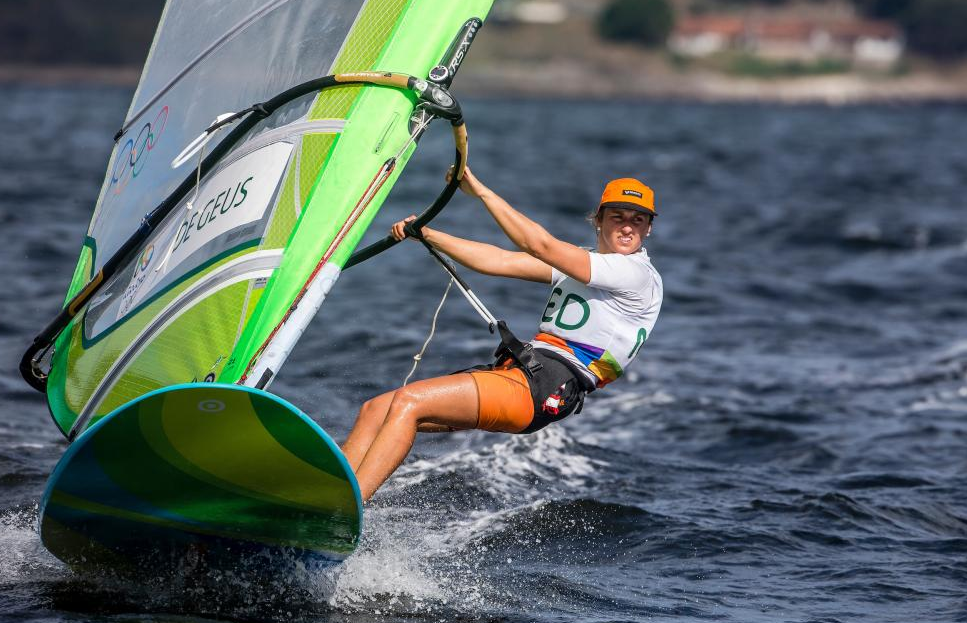 Few can relate to the agony of missing out on the Olympic podium like Lilian de Geus (NED). On Guanabara Bay in Rio de Janeiro at the 2016 Olympic Games, the Dutch sailor missed the podium by just one point.

"That was a huge disappointment," she commented. "But in the years that followed it gave me extra motivation to work even harder, so that I never finish fourth."

That fear of failure is part of what drives de Geus on towards Tokyo and helps explains her fierce work ethic which has yielded three world titles in 2018, 2020 and 2021. Her results mark her out as one of the stand-out favourites for Women’s Windsurfing – RS:X gold in an event where the Netherlands has a long history of success.

"We have a good squad, I think," says de Geus. "And good talent is allowed to the top in the Netherlands. In countries like China or Israel I often see huge teams full of talent. They wonder how we get so many medals."

Although she doesn’t work that closely with Kiran Badloe, the favourite for gold in Men’s Windsurfing – RS:X, and the other male Dutch windsurfers, that knowledge sharing can’t hurt either. There is something to her technique that even she can’t explain and nor does she know her secret!

De Geus is relatively small and light compared with most in the fleet. "I was always sad to be told by people, ‘You’re never going to make it in RS:X.’ That was very demotivating. But I have adapted. The weight of the windsurfers has gone down. I have become technically better, physically stronger and tactically smarter."

Israel’s representative, Katy Spychakov, has made big gains in the past couple of seasons. Just 21 years old, Spychakov’s competitive attitude was spotted early on when training as a young triathlete. She began windsurfing when she was 10 years old, and racing when she was 13 years old. Spychakov won the 2016 RS:X Class Youth Female World Championships in Limassol, Cyprus. It wasn’t long before she was making waves at senior level.

Off the board, Spychakov is employed as a soldier in the Israeli Navy, but right now her focus is on the top step of the podium. She has won many silver medals at World and European Championships, most recently at the 2021 World Championships just a few points behind De Geus.

On her Tokyo goals, Spychakov said, "I’m aiming higher. The silver medal at the Olympic Test Event, that’s the medal I’m most proud of up to now. The Olympic venue is fun because you get different conditions every day, which makes it interesting. A lot of things can happen at the Games, but my goal is to just push it and do my best."

They say that previous success at the Games is one of the strongest indicators for success at the next, something that the reigning Olympic Champion will be taking with her to Tokyo. Winner of gold in Rio 2016, France’s Charline Picon (FRA) finished on equal points for second place at this year’s World Championships but lost out on tiebreak to Spychakov. Even so, a bronze medal in the biggest lead-up event bodes well for Picon’s assault on the Olympic podium.

Poland’s Zofia Noceti-Klepacka has been on the circuit a long time, winning the world title back in 2007 and a bronze medal at London 2012. Even now at the age of 35, Noceti-Klepacka’s competitive spirit remains undimmed, and a third place at last November’s European Championship shows the Polish windsurfer is still in the frame for the podium.

Spain’s Blanca Manchon is a year younger than Noceti-Klepacka and winner of the 2012 RS:X World Championships and still has the pace to threaten the front of the fleet.

Nikola Girke has returned to the sport after retiring three years ago. Now aged 43, the Canadian has competed at four Games in three different sailing events and decided she just couldn’t stay away. Girke made her Olympic debut in the 470 at Athens 2004, before switching to the board for 2008 and 2012, finishing 10th at the London Games. After competing in the Nacra 17 catamaran at Rio 2016, Girke is now off the boat and back on the board, and feeling as competitive as ever.

Among the younger sailors with a real shot at the podium are Emma Wilson (GBR), fourth in this year’s World Championship, and Marta Maggetti (ITA), sixth in the Worlds.

Wilson is the daughter of Penny Wilson who twice represented Great Britain in windsurfing at Barcelona 1992 and Atlanta 1996. Aged 22, Emma won gold at Youth Sailing World Championships in 2016 and 2017. Breaking into the senior fleet scene was a relatively straightforward transition where at the 2018 RS:X World Championships she qualified Great Britain for Tokyo 2020 and came fourth overall. Having such an experienced mother has its benefits, says Emma, "She has lots of knowledge that can help me. She’s been through the whole thing and she understands that you have good and bad days. Most of the time she’s just my mum."

Maggetti follows in the footsteps of one of the greatest ever Olympic athletes, Alessanda Sensini, who, from six Olympic Games came away with four windsurfing medals - one gold, one silver and two bronzes.

At Rio 2016, Sensini’s Italian successor Flavia Tartaglini went into the Medal Race in gold medal position, but ended with nothing after the fickle breeze dealt her a poor and unlucky hand. So Maggetti understands the highs and lows that can happen to an Italian windsurfer.

With finishes of fifth, fifth and sixth in the past three World Championships, she is looking good for the medal battle. "I have reached a goal I have waited so long for, I am overjoyed. Now the final part of the route begins. It will be beautiful and challenging, there are many things to do to improve further, to refine the material.

"The postponement of the Olympics for one year allowed me to improve in light winds, and this gives me one more chance to do well in the Games."

Stefania Elfutina won bronze at Rio 2016, which should help Anna Khvorikova in her belief that she might carry on the Russian Olympic Committee’s good fortune in the Women’s Windsurfing – RS:X.

The 23-year-old from St Petersburg will be competing at her first Games but refuses to be intimidated by the more famous names she will be competing against. "To be honest, I didn't have any special idols, I understand that any result is achieved by hard work and a competent approach to the process. You can overtake anyone if you give it your best. I try not to think too hard about what might happen at the Games. You have to be able to be in the moment, I think that helps a lot in racing. I am working on my ability to race ‘on automatic’, not to be ruled by my emotions."

China has one of the strongest records in Women’s Windsurfing - RS:X, and Yunxiu Lu has every possibility of winning gold in Enoshima. Not having been on the race circuit for almost two years, Lu will be an unknown quantity, yet her track record at the Olympic venue in 2019 points toward some formidable potential.

Lu took gold at two back-to-back events in Enoshima, first at the Test Event, called Ready Steady Tokyo, next at the Hempel World Cup Series, and then victory a month later in Italy at the World Championship. China is definitely one to watch.

According to de Geus, winning in Enoshima will demand all-round skills. Being a specialist is unlikely to be good enough for gold. "It’s challenging, the weather can be very different. A lot of wind, little wind, typhoons can cause different conditions. I am an all-rounder, so I think a week with different circumstances is fine."

The 27-boat Women’s Windsurfing – RS:X fleet will commence racing at 1500 JST on Sunday 25 July on the Enoshima racing area. Twelve races are scheduled for their competition with the Medal Race to decide the podium places on Saturday 31 July. On the eve of the Olympic Sailing Competition

It’s the eve of competition for sailing at Tokyo 2020 and the boat park has been a place of focus and precision in the final 24 hours before battle commences in the Laser, Laser Radial and Men’s and Women’s RS:X. The simplest of all dinghies, and barely changed since it surfaced 50 years ago, the Laser made its first Olympic appearance at the Atlanta 1996 Olympic Games.