The London 1948 Olympic Games was the start of a remarkable run of dominance from one man, one that would last unbroken for an incredible four Olympic Games and remain unequalled in sailing until Sir Ben Ainslie (GBR) in 2012.

The Great Dane, Paul Elvstrøm, is the hero of heroes; the man the greats of our sport idolize. He is the ultimate Olympian, a master on the racecourse and always a gentleman. His innate sense of sportsmanship and fairplay holds a fame that transcends sailing. His famous line, “You haven’t won the race if in winning the race you have lost the respect of your competitors” is quoted across sports, nations and cultures.

But for those in Torquay, Great Britain at the beginning of August 1948 for the start of the Olympic Sailing Competition all this would seem improbable. The Danish Olympic Committee had reportedly voiced misgivings about sending the shy teenager who couldn’t speak English. At first their doubts would seem justified; Elvstrøm’s regatta got off to an inauspicious start with a retirement from the first race following a port and starboard incident with Finnish competitor Erik Palmgreen. In his book, ‘Elvstrøm Speaks On Yacht Racing’ Elvstrøm wrote of the incident, saying:

“Before I left Denmark, everybody said, “If you will not be the last we’ll be happy,” and I felt I couldn’t disappoint anyone, and so when I had to leave the course [In Race 1] I was feeling very low inside. Then I said, “OK, you shall not be the last,” and in the next race I came sixth, after that it went quite well.”

“Quite well” for Elvstrøm meant battling back from eighth with two races remaining to clinch the Gold; mastering the rough water in a remarkable feat of intelligence and physical fitness. In a final race where 12 of the 21 boat fleet capsized Elvstrøm’s reefed Firefly flew.

London 1948 would be the first of four back to back Gold medals and the beginning of a remarkable career which would also include winning 11 world championships across five different classes, an achievement that is yet to be matched. Although he won his last Olympic Gold in 1960, Elvstrøm wouldn’t hang up his sailing boots until 1988. Sixty at the time and sailing the physically demanding Tornado catamaran with his daughter, Trine, the master bowed out with a 15th place in the Busan breeze.

During his 40-year Olympic career Elvstrøm would be at the forefront of development. So great his genius that today, nearly 70 years on from his first Gold medal, many of the innovations he brought to the sport will still be used in Rio. The most visible of these will be the sitting out technique, known as hiking, that he developed, which will be used in 6 of the 10 classes and the ergonomic buoyancy aid, the successor to his swim vest, worn by every competitor.

Other Elvstrøm advances will shape the competition on the water of Guanabara Bay this summer including the kicking strap, or vang, that he popularized, used by athletes to control the power of their boats; his self-bailing bailer, fitted to all of the Men’s and Women’s 470s; his series of books on the racing rules with their wallet of small plastic boats and his ideas for training which paved the way for the modern athletic sport.

Every Thursday up until Rio 2016, World Sailing will look throwing it back to previous Olympic Games, looking back at the moments that shaped the sport to what it is today. 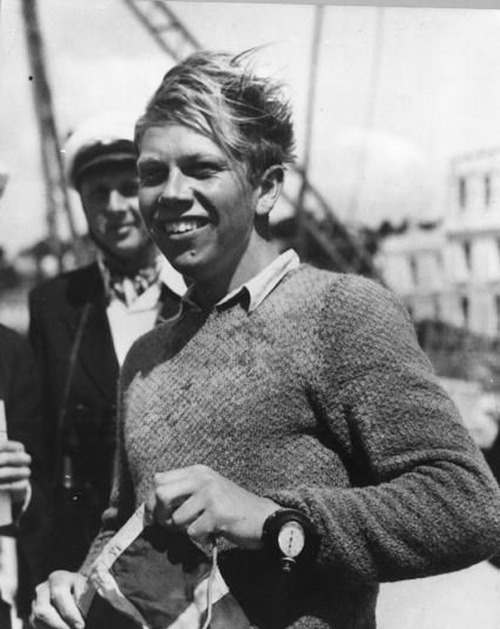 Olympics - T minus 1: What did they do with the drunken sailor?

Well, a coach actually. A drink driving offence sees one coach sent home before the Olympic party even started. And who turned down a chance to carry the flag for their country at that spectacular Opening Ceremony?

What do all of Paul Elvstrøm’s achievements have in common? Not just the four consecutive Olympic gold medals that the Great Dane won between 1948 and 1960, but the many other innovations he brought to the sport? For example, to name just three, the toe strap, the weight jacket, the self-bailer.